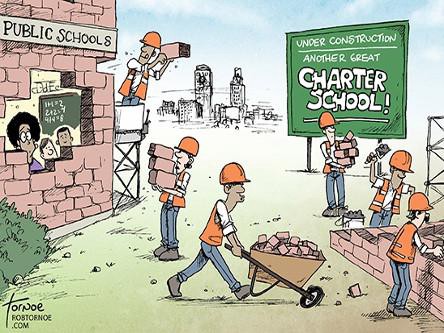 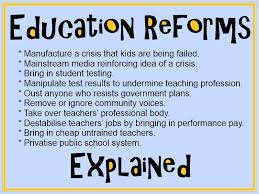 New analyses that examine the political campaign contributions from those most active in “education reform”, find the movement populated by individuals who support Democratic candidates for public office. (Education Reform’s Deep Blue Hue Are school reformers right-wingers or centrists — or neither?(3/11/19 Education Next)

“True to their findings, the leading participants in the school-reform “wars” are mostly engaged in an intramural brawl, one between union teacher-allied Democrats and a strand of so called“progressive” Democrats more intent on changing school systems through TFA, Charter School, Common Core, and Standardized data driven testing.”See my corrections in bold.

To call that latter group of Democrats progressive is an insult to Progressives who firmly believe in the sanctity of Public Schools and the creative powers of public school teachers, not top down instructional techniques or curricula. It shows the ignorance of these researchers because they looked at political contributions, not education as a core issue.

Why the authors say “school reform is routinely portrayed as a right-wing enterprise” is beyond me.  They say the “education-reform” community defends itself as bipartisan, school reformers are decidedly left-leaning, with 87 percent or more of the political contributions by staff at “school-reform” organizations going to Democratic candidates and causes.

However, when you begin to throw in the issues surrounding Common Core, the Republican side of these issues comes out loud and clear because of the fear of “liberal brainwashing” through Common Core Curricula. I have been witness to this when I spoke to a group of South Carolina Tea Party parents about why Common Core was bad for us all. Many pulled their kids out of schools to home school.

Trump and DeVos are meaningless to them. The people I spoke with wanted to get rid of Lindsay Graham!

Who says this? Please tell me!

This has nothing to do with the past 2+ years of Trump and DeVos. This reform has been going on since Reagan, Clinton, and more harshly through both the Bush and Obama years. It has been a truly Bi Partisan effort to destroy Public Education and make teaching less relevant (regardless of TFA Hype).

The authors go on to say, “The most visible symbols of education reform—such as Teach for America and various charter school networks and the foundations that fund them—are characterized as neoliberal, corporatist, conservative, and right-wing.”

Let me set you all straight:“The most visible symbols of education reform—such as Teach for America and various charter school networks and the foundations that fund them—can be liberal or conservative, centrist, or right wing.

The Atlanticattacked the KIPP charter schools for their role “in the project of neoliberalizing public goods.” THIS IS TRUE.

Success Academies founder Eva Moskowitz has been excoriated for promoting a Trojan horse that contains “Donald Trump and Betsy DeVos.” THIS IS ONLY SINCE 2017.What about during the Obama-Duncan years?

The Walton Family Foundation has been dismissed as “conservative” or “deeply conservative” by the Huffington Post3 and historian Diane Ravitch. WHO WILL ARGUE THAT…EVER?

NOW THIS IS VERY TRUE: Regarding Teach for America (TFA), Rethinking Schools has published “An Open Letter to New Teach for America Recruits,” which reads: “Many of you no doubt believe you are joining a progressive education justice movement; that is the message TFA sells so well. But TFA is not progressive.

The data-driven pedagogy, the fast-track preparation, the union-busting, the forced exploitation of your labor, the deep-pocketed affiliation with corporate education reform are all very conservative, very anti-progressive ideas.”

THE QUOTE SHOULD LEAVE OUT CONSERVATIVE. It is ECONOMICALLY MOTIVATED NEO LIBERALISM! 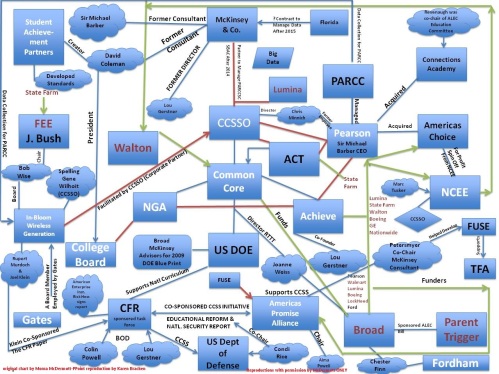 “Meanwhile, education-reform advocates like Chiefs for Change describes itself as a “bipartisan network of diverse state and district education Chiefs.” Stand for Children touts its “bold independence” and bills itself as “non-partisan and child-focused.” ALL THAT IS TRUE, IN THEIR OWN MIND.

The question really is how are they tied to corporate interests? Microsoft? Apple? Charters? Data collectors? ED REFORM IS NOT A POLITICAL SCHEME, IT IS ECONOMIC AND WILL USE WHOEVER IS IN CHARGE OF POLICY TO MAKE IT HAPPEN.

Thus, “While it is not practicable to examine the voting habits or partisan affiliations of education reformers, we can identify the candidates and political causes to which they contribute. And the pattern of their political giving suggests that the people who work at the education-reform organizations supported by the biggest and best-known education-reform foundations support almost uniformly left-leaningdemocratic. In other words, education reform turns out to be neither a red nor a purple enterprise—but a deepblue one.” (NOTE MY CORRECTIONS)

“Teach for America chapters, charter school groups, and education-advocacy groups have gone out of their way in recent years to demonstrate their progressive bona fides (and disagreement with Republicans) on issues such as immigration,10 school discipline,11 transgender access,12 and school vouchers. THAT DOESN’T MAKE TEHM PROGESSIVE EDUCATORS!

SO BACK TO THIS: “We find that the movement is populated by individuals who support Democratic candidates for public office.”

Mostly Education; a Smattering of Politics & Pinch of Personal